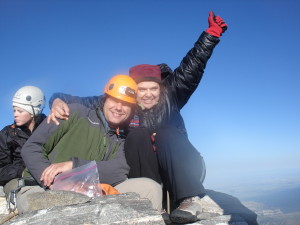 We arrived at the Exum offices right on time…and an hour early. Joanna claims it was my underwhelming scheduling skills – I’ll blame it on excitement. Either way, we were at the base of the Teton Range in Grand Teton National Park, ready to assault the second highest peak in Wyoming. Ironically, the iconic Grand Teton is hidden from view from the Exum offices, but we knew it was looming above us, and we were ready for the challenge!

The Grand Teton is not the kind of mountain you just walk up. At 13,770 feet, it juts into the Wyoming atmosphere like a spear, gaining 7,038 feet of elevation in about 7 miles. Experienced Grand climbers know the routes like the back of their hand, but as we were soon to learn, the mass of ledges, chimneys, and ramps is so bewildering it is a wonder Owen/Spalding ever picked their way to the top. And the exposure – standing with toes just inches from the edge of 2,000 ft. cliff faces – means this is far from your standard “walk up”.

No, we needed help. Big time help. In the Tetons, that kind of help comes from the folks at Exum Mountain Guides – the oldest, most experienced mountain guiding service in Grand Teton National Park. Glenn Exum and Paul Petzoldt started guiding clients up the Grand in 1925. I figured 85 years of guiding experience would qualify someone there to haul me and my wife up to the top. Lucky for us, that guy was Tom Hargis.

At 62 years young, Tom is one of the fittest individuals I’ve ever met. I ask you this: at 19 years old, at the peak of your physical fitness, could YOU do pull ups with 70 lbs of weight tied to your shoes? With one arm? Yea…me either. Tom routinely climbs the Grand, Moran, Gannett and other exotic routes week in, week out, all year long. We were in good hands.

The start of the trail is easy. Make no mistake, it is steep, switchbacking its way up to the bottom of the cliff bands in Garnet Canyon. But the elevation is relatively low, and we’d been trying our best to get our legs in shape on our Sinks Canyon training climb. We climbed steady and strong. We were off to a good start.

Taggart and Bradley lakes shrunk into the distance as we moved up the canyon, and with one jaw-dropping corner the Middle Teton, with its massive black dike, soared above us. It was hard to believe that, in less than 24 hours, we would be standing almost 1,000 ft. above it.

At the head of Garnet canyon is a little area called “the meadow.” Here the runoff from the glaciers and snowfields directly above runs so clear it was as if you were looking through flowing air into the wet, glacier smoothed rocks below. Above us, and high up to the right, the stream tumbled over a cliff band, creating a beautiful, white cascade. Unfortunately the trance was broken when we realized that our trail was bound for points well beyond that high cascade. Onward we trekked.

Like a light switch, our lungs realized we had climbed the height of the tram at Teton Village, and reminded us that we were no longer hiking up our old friend in Sinks Canyon any more. Like an evil trick, the elevation was compounded by the pitch – from “the meadow” to the “Lower Saddle” the trail goes seriously, oxygen-deprivingly vertical. We marched on, step at a time, focusing on our breathing and letting our uber-guide set a pace he felt us low-Landers (pun sort of intended) could handle.

By roughly 5:00 pm we arrived at a well known spot called the “Lower Saddle”. At 11,600 feet, this is the ridge that connects The Grand and The Middle Teton, and divides the range north to south. If you look west, you can see Victor, Driggs and the potato fields of Idaho. East lies the Snake river, the Gros Ventre Wilderness and, in the far-off distance, the gorgeous, glacier-capped peaks of my beloved Wind River Range.

For us, nighttime came early – before the sun went down – with 13 strangers all packed into a small hut. In spite of a lack of heat, running water, indoor plumbing or anything that resembles a bed, this is the Four Seasons of the Grand experience. Other climbers were holed up in tents perched on rocky outcrops, or in bivy bags stuffed beside rocks to cut the wind. Happy to be on a level floor and protected from the rain, we all closed our eyes tightly, knowing we wouldn’t sleep a wink, and that 3:00 am would come mighty early.

Which it did. “OK, time to get up!” the guide yells as he boils water for our breakfasts and flips on the solar-powered lights. He gave us about 30 minutes to clean up camp, eat breakfast, use the “facility”, get on our harnesses, and flip on our headlamps. Joking time was over – these guys had instantly transformed from fun-loving tour guides into climbing professionals, ready to do their job: keeping 13 climbing novices safe in an unforgiving environment that had, over the years, claimed many lives.

As we moved out in the darkness, we could see small groups of headlamps far above us, separated from the brilliant starlight by a void of black, and distinct from it only in that the groups were steadily moving upward. The lights were so high up it seemed surreal, as if they were hanging in space far above us, not tethered to the ground, but floating in the air. Yet, as we hiked up the north ridge of the saddle, we became those lights, and the lung-busting pitch at which we proceeded verified that our predecessors were not apparitions, but other climbers on a quest for the summit.

Joanna has asthma – she seldom has an attack, but it makes breathing a bit harder than for the rest of us. At 12,000 ft., that difference is compounded, and it was making the task of putting one foot before the other extremely difficult. The night before she and Tom had agreed that she would decide if she wanted to go for the summit attempt at a placed called the Black Dike. He explained that here was a critical point; she could return safely on her own, leaving Tom and I to continue up the mountain, or make the summit attempt, understanding that, at any point beyond this, if she turned back it meant we all had to return together. In spite of the thin oxygen, she decided to go for it. I knew she would. And I am so proud of her. Sometimes her strength simply amazes me.

Up and up we went — walking up the “Sidewalk”, past the “Watering Hole” and through the “Eye of the Needle.” We were following the famed Owen-Spalding route, although for the life of me I still can’t figure out where the other standard Grand routes split off from our course. We marched in the dark, our headlamps illuminating 10 feet in front of us, unprotected for most of the climb, the darkness of our light beam fading into inky blackness if we pointed it away from the rock.

Light finally dawned when we reached the Upper Saddle – a point that, at 13,200 feet, is higher than nearly any other peak in the state of Wyoming. Joanna and I got a burst of energy when the emerging light allowed us to look DOWN on the Middle Teton – that same spire of granite that we were in awe of just the day before. Also inspiring was our guide, evidently aware of our tiring legs, heavy breathing, and weary steps, who informed us that, from this point forward, each step meant another foot of elevation – and when you are only 600 feet from the summit, that put into perspective the effort required to make each footstep.

Up to this point the climbing was certainly exposed, but not in the manner you might think of as you look at the Grand from the floor of the valley. Yet here, as we stood above the Black Ice Couloir and the Valhalla Canyon, the exposure went full-tilt. The “ground” dropped away below us several thousand, dizzying feet. As we watched our team climbers move out ahead of us, on belay of course, it dawned on me that men like Owen, Spalding, Exum and Petzoldt pioneered these amazing routes without a guide above them aiding them in times of trouble, keeping them from tumbling to their deaths in the valley below; without fancy climbing shoes with sticky rubber; without LED headlamps, synthetic fabrics, and lightweight equipment; without modern climbing gear. I’m not sure if they were nuts, or adventurous, or both – whatever they were, they were certainly courageous!

There are two famous features on the Owen Spalding I was really looking forward to – “Belly Roll” and “Belly Crawl.” Belly Roll is so-named because you need to reach up above you for hand-holds as you stretch on your “belly” for foot holds below. In practice it is less of a stretch than lore would have you believe, but with thousands of feet beckoning you from below, it certainly got my attention! Belly Crawl is a fascinating ridge where you have three choices – crawl safely on your belly next to the cliff face; straddle a knife edge between the cliff and the precipice; or use the knife as a hand-hold and find the “bucket” foot holds below the edge. This little maneuver was even more intimidating with the knowledge that, only three weeks prior, a climber was struck by lightning on Belly Crawl, causing an equipment failure and propelling him into the void below. That was certainly on my mind as we moved across the knife edge to the features beyond.

We continued in shadows, up the vertical face, past a feature Joanna and I dubbed the “Funky Chicken” – because that’s what we looked like trying to get up it – and the Spalding Chimney, made difficult because of the glaze ice that had formed from the freezing rain the night before. Up and up we went, until at long last, we could see a lone rock bathed in sunlight. At 13,770 feet, that rock had never known what it was like to be in a shadow. It had never had a superior, never stood junior to any other rock during its millions of years of exposed lifetime. As we transitioned from the cold, gray into the brilliant, blue-sky sun rays, we shared that same, amazing feeling of being beyond the shadows. Sitting on that hunk of granite that knew no peer, we temporarily experienced what it was like to be that rock, to share in the feeling of confidence that we could accomplish anything, that there was nothing and no one in the world that could stand above us, blocking us from the sunlight to which we were born to feel. We had made it. We had climbed the Grand.

NOTES FROM THE FIELD: