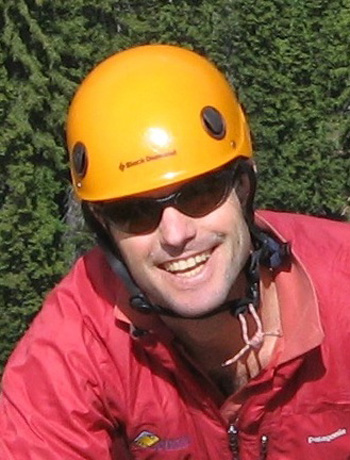 Tyson has been with Exum Mtn Guides since 1999, and is the lead guide and director of Utah Mountain Adventures (UMA). He is an avalanche instructor at Westminster College and the author of Backcountry Skiing Utah. Tyson remains passionate about skiing and climbing in Utah, Wyoming and worldwide. In the Wasatch Mts he guides backcountry skiing, avalanche classes, mountaineering, and ice and rock climbing. When it gets hot, he escapes to Wyoming, and leads climbs in the Tetons and Wind Rivers.

He continues to push himself and his clients in the mountains. In October ’11, he led 3 clients to Ama Dablam, 22,350′, with his own guiding company, Global Mtn Adv. In March, 2009, he guided a 20,000+ foot ski “tour” in Utah. In August, ’08 he led the Cathedral Traverse in the Tetons in one 20-hour day. He’s also shepherded steep ski descents including the Grand Teton, Gannett Pk, Castle Pk, Colo., NW Couloir of the Pfeifferhorn, Coalpit, Superior and Stairs Gulch.

Tyson grew up climbing and skiing in Idaho and Wyoming, and has guided since 1994. He’s led 10 Denali Expeditions and guided over 100 ascents each of the Grand Teton and Mt. Hood, Oregon. He leads UMA’s annual Rainier climbs and has guest-guided in British Columbia, SE Alaska, Colorado, California, Nevada, Chile and Russia. He heli-ski guides for Wasatch Powderbird Guides.

Tyson in the News