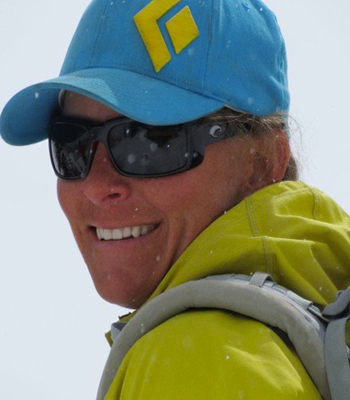 Languages: English, German, and some French and Spanish

Karen grew up Germany and moved to the United States in 1995. She has a M.S. in Physics and competed as a professional athlete in road cycling and ski mountaineering. Her passion is being out in the mountains. She has climbed in the Black Canyon of the Gunnison, Indian Creek, Red Rocks, Yosemite, the Tetons, the Cirque of the Towers, and the Mooses’ Tooth in Alaska’s Ruth Gorge. She skied many of the Colorado Fourteeners, the Grand Teton, and Denali, along with trips to the Canadian Rockies, the Coast Range, Valdez, AK, the European Alps, and the high Andes in Chile.

In 2010, Karen began guiding on the West Buttress of Denali. She now works year-round in the mountains, guiding in the Tetons, the Alaska Range, and the San Juans in Colorado. In the winter, she also ski patrols in Telluride. Karen is an AMGA Aspirant Rock and Ski guide.

Karen in the News